During the presidency of Volodymyr Zelensky, Kyiv, in fact, removed from the agenda the peacekeeping mission in all of Donbas, but this issue must be reconsidered, says Olexiy Haran, Professor of Politics, Kyiv Mohyla Academy; Research Director, Democratic Initiatives Foundation. In an interview with Promote Ukraine, he explained the reasons for Leonid Kravchuk’s appointment as head of the Ukrainian delegation to the Trilateral Contact Group on Ukraine and why ceasefire agreements in Donbas are needed, although they are not always implemented. He also outlined what the threats are.

What do you think of the change of leadership in the Trilateral Contact Group? How is Leonid Kravchuk better or worse than Leonid Kuchma?

I think that this will not lead to any fundamental changes, because the line, the main line, is not determined in Minsk, but by the leaders of the countries. That is, in this case, it is either the Normandy format or bilateral negotiations between Kyiv and Moscow. Similarly, decisions are made at the highest level in these capitals and in Washington.

The Minsk Trilateral Contact Group is important for agreeing on some details, for the implementation of those decisions that are made at the strategic level. Therefore, the roles of both Kuchma and Kravchuk are limited. I think that Kravchuk was appointed because he is a more of a media person. And we see that Kravchuk is active on television, in the press, and, let’s say, he is more talkative than Kuchma. In this sense, they want to use it, so to speak. I would say it’s more about form than essence.

What the essence will be, we do not really know. Because, on the one hand, there is a desire to reach some concrete solutions for peace, or at least a truce, an effective truce. But we don’t know at what cost this can be achieved. Where is the limit? Where are the red lines that Zelensky and Yermak will not cross? In fact, although the final word is for Zelensky, but he decides to use information that is put on the table by his immediate environment, which he trusts.

First of all, Yermak influences him. We saw that on 11 March Yermak initialled an agreement to establish an advisory council, which was dangerous because both his and Kuchma’s signatures were placed next to the so-called “authorised representatives” of ORDLO. This has never happened before. Nowhere, neither in Minsk-1 nor in Minsk-2, is it written that these people are “authorised representatives.” And thank God that there was opposition from civil society and this agreement was not signed in its final form.

As for another personnel issue, what will be the consequences of Dmitry Kozak’s withdrawal from the negotiations in the Normandy Contact Group?

He did not talk about withdrawal. He said that there was no need for contacts in negotiations at the level of representatives of the presidential administration, respectively, presidential advisers. That everything should be concentrated at the ministerial level. I think this is a kind of pressure. And the pressure is more propagandistic. We know that the Russian line is to accuse Kyiv of breaking the agreements.

And now the main thesis pursued by Moscow, Moscow’s propaganda, is that Zelensky is the same as Poroshenko who does not seem to want peace. But this is not true. Because both Poroshenko and Zelensky wanted peace. But we came across the position of the aggressor. Therefore, I would view it this way.

If we are talking about Russia, which, however, is a common thread through this interview, then this is the question. There was a statement by Deputy Prime Minister Oleksiy Reznikov about the long-term need for a peacekeeping mission in Donbas. How realistic is it if we know that the Kremlin is blocking all decisions in the UN Security Council on this issue?

The situation with the peacekeeping mission is ambiguous. We understand how difficult it is to implement this decision, but with all that, these talks were held under Poroshenko, and our Western partners understood that this mission was at least worth talking about. And we remember that then Germany supported the Ukrainian position that peacekeepers should be not only on the line of demarcation but throughout the occupied Donbas. It is very important. That is, the Ukrainian position was aссepted.

But now we see that under the current government, the issue of peacekeepers has been postponed. The emphasis is on bilateral talks with Moscow, with Putin, and this could legitimise militants. And it’s actually very dangerous. Because in bilateral negotiations Ukraine always loses. With all presidents. It seems to me that Zelensky is focused on quick solutions, so he believes that you can look Putin in the eyes and see that he wants peace.

And all the people around him assume that the peacekeeping mission will take a long time. It is unknown when this will happen, and Russia will still veto it. But I get the feeling that the fact that we have actually removed this issue from the agenda weakens the Ukrainian position. This card should be present; it should be used to put pressure on Russia.

Just recently, another agreement on the ceasefire on the line of demarcation was signed, and this agreement was again violated by the Russian occupation forces. Do you think such ceasefire agreements are needed if they are violated anyway?

There are shots fired, but they’re episodic, no sightings, no casualties. And so we can say that, in principle, there are no massive firings and this is a step forward. Although there are reports that the militants are also actually using the ceasefire to strengthen their defensive capabilities, in some places they continue to strengthen their positions, which is contrary to the terms of the ceasefire.

What do I see as the problem? We have not yet seen the armistice agreement with all of the signatures. We know about it only in the stories of either the OSCE or the Ministry of Defence of Ukraine. We do not know who signed the agreement, in what capacity. And this is very important because if there are signatures of militants, and it is again stated that they represent someone, it can actually be a step to legitimise the militants.

There is a mention of the actions of the Joint Control and Coordination Centre “in the current composition.” I do not understand what the “current composition” is because Russia left the centre in 2017.  It means, that this centre does not function. There is only Ukraine on its own. So, the question is, has Russia returned there? I have not seen any official reports about this. Therefore, there is a suspicion. Who is there? Militants? I hope not. But we do not know about it, and we are still kept in the dark about it.

But do we still need these ceasefire agreements?

When a truce is respected, of course, I think it’s good. We need it. Again, Putin’s strategy is to “exhaust” Ukraine. When there is no truce, when there are shots fired. When there are losses on the Ukrainian side, it is an instrument of Putin’s pressure on Ukraine, both on Poroshenko and on Zelensky.

With this, Putin is putting pressure on the internal situation in Ukraine. It is a tool for undermining the positions of the Ukrainian authorities. If there is an effective truce, it allows us to focus on our internal transformations, on reforms in Ukraine. That is why Putin has constantly violated all kinds of truces. So the truce is a plus. The question is that we do not give up principled positions.

Kravchuk recently suggested revising the Minsk agreements. Do you think there is a need for this?

If it is possible, of course, then yes. Because in the Minsk agreements there are advantageous and non-advantageous points for us. If they can be revised in favour of Ukraine, it will, of course, be good. The problem is whether Russia will agree to this. We don’t know it. This is the first. And secondly, Kravchuk, when he talks about it, he tries to blame everything on Poroshenko. That’s who is to blame.

He repeats all these propaganda tricks: that Poroshenko promised to end the war in two weeks. It is a shame for Kravchuk’s level when he repeats all this. Because we have to understand that Poroshenko said it when there was no Russian intervention. At that time, it really seemed that this conflict would end very soon. Then, the Russian troops came. Both Minsk-1 and Minsk-2 were signed as a result of the offensive of these troops when Ukraine was in a very difficult situation. And this explains why they signed these agreements, which have very unfavourable positions for Ukraine. So, if you can review the agreements, then, of course, it will be great. I am just afraid that Russia will not go for it.

Is there a need for a referendum to approve the Minsk agreements? 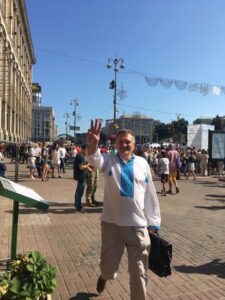 Bringing these agreements to a more formal level required at least their approval by the Verkhovna Rada. But at the same time the Minsk agreements were supported at the level of the European Union, at the level of the UN Security Council. Also European Union sanctions are tied to Russia’s implementation of these agreements. As for the referendum, the danger may be that Zelensky and Putin may reach a decision on the status of ORDLO, and then Zelensky will say, “I brought you peace. Do you want this peace?”

Then it is necessary to approve these new agreements, which, for example, may cite some provisions of the Minsk agreements – on special status, elections and so on. There may be such a danger that Zelensky and his team will use peacekeeping rhetoric and then ask Ukrainians to support such a version. And it can be really dangerous.

I think that a frozen conflict, a really frozen one, with no or occasional shooting, will allow Ukraine to focus on internal transformations. That’s why Putin does not want a truce. But there might be an even more dangerous situation if, after the truce, Putin says to now carry out the political part of the Minsk agreements without a real withdrawal of Russian troops, disarmament of militants, as the agreements say. It would mean to get a Trojan horse in the form of ORDLO as part of Ukraine.

This option is even more dangerous. Will Ukrainian diplomacy manage to avoid this? I do not know. Earlier, under Poroshenko, we avoided this. Because, in the end, we did not give up our positions either on the special status or on the elections in the occupied territories. Because the Ukrainian position was very clear: security first. And the West has accepted that position. Finally. But that’s why Putin did not make any concessions to Poroshenko. Now, we see one–exchange of prisoners, the second one. The third one was announced.

And it looks as if Putin is making concessions, but in reality, it is more of a cover story for him to say: Russia is showing progress, let’s lift sanctions on us. Instead, Ukraine is making concessions, and they are quite significant. For example, the Steinmeier formula, which was signed in a worse form than Steinmeier himself proposed. Or when we release members of Berkut special police forces who have nothing to do with the conflict in Donbas. Or Tsemakh (Volodymyr Tsemakh is a key witness to the downing of the Malaysian airliner MH17 in 2014 – ed.). For me, the biggest indicator, the biggest concession or betrayal, in general, was the signature of Yermak next to the “authorised representatives” of ORDLO. Thank God it was not realised.