Nothing is final as long as we are alive!
Iryna Bekeshkina 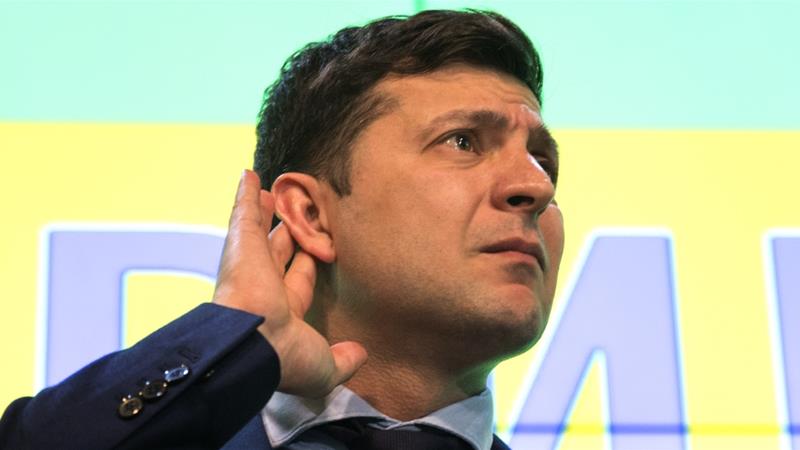 Zelensky has avoided giving details of how he intends to fix the country, critics say [Emilio Morenatti/AP]

About 20 Ukrainian news outlets have called on presidential frontrunner Volodymyr Zelensky to stop avoiding the media before a runoff vote on Sunday.

Zelensky, a 41-year-old comedian, has to prove that the principles of openness and transparency that he proclaims "are not just empty words", the organisations said in an open letter published on Tuesday.

"Our readers, viewers and listeners are asking questions we cannot answer since we have not once talked with you directly," the letter said.

"Our professional duty as journalists is to bring important information to the public in a timely and comprehensive manner. Since you ignore our interview requests, we cannot fulfil this function."

Despite his minimum engagement with mainstream media, Zelensky, a political novice, is expected to easily win on Sunday. In the first round of voting on March 31, he secured more than 30 percent of ballots, ahead of the runoff rival, incumbent President  Petro Poroshenko, who secured under 16 percent.

Throughout his campaign, Zelensky has reached out to voters on social media channels and YouTube clips. Critics, however, accuse him of avoiding direct questions and not providing specific details of how he intends to fix the country's problems.

Brian Bonner, the editor-in-chief of Kyiv Post, told Al Jazeera that there were "a lot of unanswered questions about Zelensky".

"I don't even think his supporters or his campaign advisers know what is going to happen if he is elected president," Bonner said on Tuesday.

"But from the latest opinion polls today, Zelensky is going to win 70 percent of the vote. This is a clear indication that Ukrainians are going to vote for change in power even if they don't know what the change in power will mean."

Zelensky supporters who spoke to Al Jazeera during the first round of voting said they were backing him because he was not a politician. They argued that Zelensky would come to power "to fulfil his civic duty" and fight Ukraine's endemic corruption from the country's top seat.

For more than three years, Zelensky portrayed a teacher-turned-president battling corruption in the popular sitcom, Servant of the People.

Oleksiy Haran, a professor of comparative politics at the University of Kyiv-Mohyla Academy, told Al Jazeera that Ukrainians did not realise that they were electing a TV character instead of Zelensky.

"The problem is that Zelensky is a very inexperienced [candidate] and he is not prepared for a meaningful debate. So that's why the whole strategy of his campaign has been based on avoiding contact with experts and journalists," Haran said.

"People projected the image of the fictional president in his movie into the real candidate. This is a psychological phenomenon. When Zelensky is starting to speak, he is making a lot of mistakes. That's why the position of his team is actually to avoid any direct communication between Zelensky and journalists or experts."

At the weekend, Zelensky was a no-show for a debate against Poroshenko.

Zelensky's critics fear that if he wins, Ukraine will be run from the shadows by Ihor Kolomoisky, an oligarch who owns the TV channel that airs the candidate's TV series.

A study by Reuters news agency of vehicle registration databases, company ownership documents and photographic records suggested on Tuesday that Kolomoisky and Zelensky intersect in other ways.

According to the Reuters report, the two men have common business partners; Zelensky uses security staff who in the past were also seen accompanying Kolomoisky; a former Kolomoisky adviser is on Zelensky's campaign team; and at least two vehicles used by Zelensky and his entourage are owned by people or entities linked to Kolomoisky.

None of the reported evidence demonstrates that Kolomoisky is financing Zelensky's campaign or influencing him.

Both Zelensky and Kolomoisky have said their relationship is strictly professional, and centred on the comedian's TV work. Both say no undue influence is being exerted by the oligarch.

Haran told Al Jazeera that there was no doubt that Zelensky was connected with Kolomoisky.

"The question is to what extent he will depend on Kolomoisky when he becomes a president," he said.

The search for ways to restore Ukraine’s sovereignty over the occupied Donbas: public opinion on the eve of the parliamentary elections

Constructing a Political Nation: Changes in the Attitudes of Ukrainians during the War in the Donbas

The fight against corruption in Ukraine: public opinion

The nationwide public opinion survey in Ukraine was conductedon May 19-25, 2018

Introduction of a visa-free regime with EU countries is important and very important for 39% of Ukrainian citizens.

Zelensky forced to ‘face reality’ over peace process with Russia

Oleksiy Haran suggested that the contrast between the president's apparent attitudes and U.S. policy -- on Ukraine and other issues -- is li...